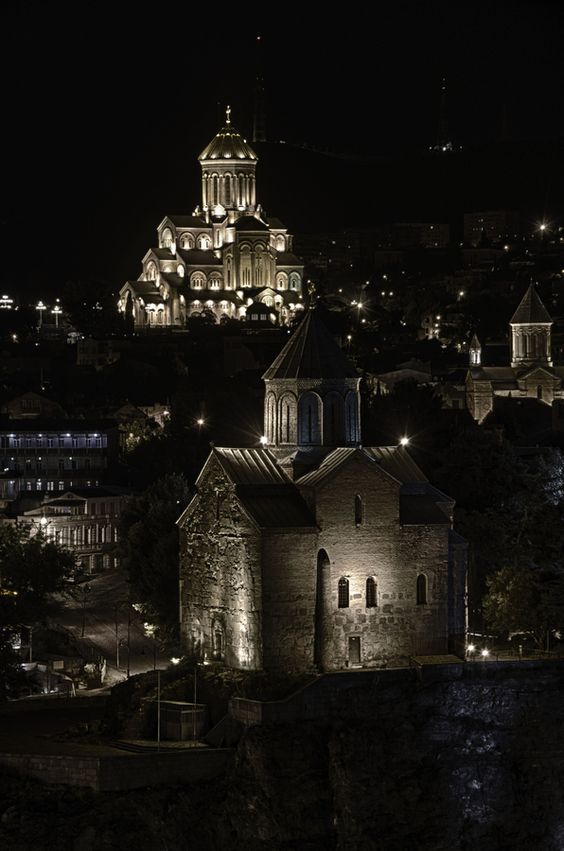 1 TONGUE TWISTER
Spoken Georgian is like no other language you are likely to hear. It belongs to its own ancient linguistic group unlike any other language spoken outside the region. It includes rare sounds that many visitors may never have heard before. Some consonants, for example, are pronounced from the back of the throat with a sudden guttural puff of air. Georgian has its own 33-letter alphabet thought to be based on the sort of Aramaic spoken in the time of Jesus. To the untutored eye, the letters look very much alike. A squiggle too far and your "k" can easily turn into a "v" or a "p". But even without understanding it, Georgian writing is beautiful, a myriad of theatrical swirls and flourishes. Very fitting to a country of dramatic personalities.

2 GEORGIA ISN'T CALL GEORGIA
At least, not by Georgians. They call their country Sakartvelo. The origins of the country's name in English are obscure. One theory points to the Middle Ages when Christian crusaders swept through the region on their way to the Holy Land. At that time, it was part of the Persian Empire and the people here were known as "Gurj". They were also devotees of St George. Theory has it that the crusaders made the connection and named the country Georgia. These days, there's no mistaking the link to St George. A golden statue of the saint slaying a dragon dominates Tbilisi's central square. He is also Georgia's patron saint and the national flag featuring his red cross on a white background is everywhere.

3 GEORGIA IS WHERE JASON AND HIS ARGONAUTS FOUND THEIR GOLDEN FLEECE
Jason, the ancient Greek mythological hero and leader of the Argonauts, set out on a quest to find the legendary Golden Fleece. His journey is said to have taken him to Colchis on Georgia’s modern day Black Sea coast where he claimed the Golden Fleece upon completion of three deadly tasks. There is a degree of truth in this as sheep fleeces were used in the region to sieve for gold in rivers.

4 HIGH MOUNTAINS
What's the highest mountain range in Europe? The Alps? Wrong. It is the Caucasus Mountains marking the border between Georgia and Russia. While the highest peak is in Russia, Georgia lays claim to the second highest, Shkara, which at 5,193m (17,040 ft) beats Mont Blanc by nearly 400m (1,312 ft). These dramatic mountains, with their terrifying hairpin roads and hidden villages cut off at winter, are the stuff of legend. In Greek mythology they were one of the pillars holding up the world. And it was here that Zeus tied up Prometheus, to have his liver eaten by eagles. Today they are increasingly becoming a destination for climbers, walkers or skiers looking for adventure.

5 AN ARCHITECT'S DREAM
There is a startling amount of space-age architecture in Georgia. The new parliament building is a huge glass and concrete bubble, looking like a giant frog's eye. A slew of new police stations have been built that are all glass and see through, symbolic of Georgia's aspirations for democratic transparency. Meanwhile, many of the country's roads and infrastructure remains in bad shape. President Mikheil Saakashvili's preference for flashy prestige projects to impress foreign investors and politicians, has not gone unnoticed. Also, while glass government buildings may work well in temperate Northern Europe, buildings constructed like greenhouses are less suited to Georgia's scorching summers.

6 GEORGIANS ARE A FRIENDLY BUNCH
A guest is a gift from God, goes the saying in Georgia. So foreign visitors are plied with food and drink - an enjoyable experience, if not always good for the waistline. But "a toast!" is the phrase dreaded by any visitor with a busy work day ahead. Out comes a bottle of Chacha, the lethal Georgian schnapps, or a large plastic bottle of homemade wine. Both must be downed in large shots. Excuses that you have to drive back six hours along twisting mountain roads won't be accepted. Instead, you'll be offered a bed for the night, and be propelled into a full-scale traditional feast.

7 RELIGION IS BIG
While many European nations have seen religious adherence fall in recent decades, the Orthodox Church in Georgia is booming. Attendance, adherence and respect for the Church are all growing. Over 80% of Georgians say they belong to the Church while its head, Patriarch Ilia II, is the most respected public figure by far, with popularity ratings over 90%. Dating back to the 4th Century, the Church helped the country keep its ancient musical traditions during the Soviet era and has been central to Georgians' sense of themselves since independence.

8 KEEP IT IN THE FAMILY
After centuries of domination by foreign powers, Georgians are sceptical of government. So family and friends are crucial for getting anything done. "I have a cousin who can sort it," is what I was frequently told when I had a problem. One such cousin helped us buy a second-hand car, another got us accommodation at an army base when heavy snow trapped us in the mountains. With social welfare often patchy, it's the family on which Georgians rely in times of crisis.

9 GEORGIA IS IN EUROPE, NOT THE UNITED STATES
The leafy boulevards of the Georgian capital Tbilisi look like Paris, and the English-speaking young hipsters wouldn't look out of place in Berlin. But take a look at a map and you'll find the former Soviet republic 1,000km (600 miles) east of the Bosphorus, marooned in Asia. One definition of Europe marks the Caucasus Mountains as its border, putting Georgia firmly in Asia. Other definitions place the whole Caucasus region, including Georgia, in Europe which is where most Georgians feel it belongs. Head into the countryside however, where farmers scratch out a subsistence living, and it's a different story. If this is Europe, it can sometimes feel more like 19th-Century Sicily than the modern-day EU.

10 GEORGIAN WINE
In Georgia, found the vessels that prove that the viticulture in the country has an 8-thousand-year history. The Georgian wine as the oldest in the world was recorded in the Guinness Book.